All Kinds of Kinds

We went to the Miranda Lambert concert last week. It was fantastic from the opening act all the way through Miranda’s finale. Lots of energy, lots of talent, and a whole bunch of entertainment. Of the dozens of songs we heard that night, one in particular struck me as poignant. I know, I know… most people don’t think “poignant” when they think of Miranda Lambert, but trust me on this one.

While I love the message of the entire song, it was the opening stanza that caught my ear; it’s all about people in a circus. And I immediately thought about the Macabre Inn and the old, dysfunctional, broken down circus that my sister is pouring her heart and soul into. How can I not think of Catherine when I hear:

Ilsa was an acrobat who went and fell in love with that
Horatio the human cannonball.
A weddin’ ‘neath the big top tent with barkers clowns and elephants
Sideshow family oddities and all.

Ever since the beginning to keep the world spinning
It takes all kinds of kinds.

The Macabre Inn’s circus has acrobats, clowns, elephants, sideshows, a big top tent, and so many other cool and interesting displays. (I’m ignoring the “human cannonball” line for fear that when I get home tomorrow, she’ll have somehow constructed a life sized cannon and experiment with shooting large stuffed animals out of it – although that would be preferable to experimenting with her dog or youngest son…)

Which leads me to the meaning of the song. The chorus – It takes all kinds of kinds.  I’ve rarely heard one line that captures so much. It sounds so simple, but the truth in it runs deep. If it weren’t for people’s differences, what would this this world be like? I’ve told you that I was never really into Halloween. I kind of don’t get it….. And yet my sister lives and breathes this passion. I know there are times that all of us around Catherine on a daily basis look at her like she’s nuts for putting in the kind of time, energy, blood, sweat, and tears we all see. But in the end, her Halloween passion brings awe-inspiring joy and amazement to hundreds, if not thousands, of people.

I think about the various people I come across in any given day. – some of them drive me crazy. Some of them make me laugh. Some make me shake my head in disbelief. Some of them make me sad. There are those who inspire me. And those who make me think I’m SO glad I’m not like that! But the real truth is that all of them add to my life in one way or another – for better or worse – they give my life depth, balance, and perspective. It is always good to step back and reflect on what others add to your life. Because it takes all kinds of kinds.

Yes, it’s been awhile since my last post. The last month has been just a wee bit crazy (and we all even managed to squeeze in a long weekend enjoying excellent music, lots of laughs, a few beers (and margaritas, and pina coladas) and an overall great time at Country Thunder), but that hasn’t slowed Catherine down at all. She’s in full court press creating steamy gargoyles, three-dimensional signs, and, yes, finishing the alligator (crocodile?) masterpiece. Needless to say, I have a lot of material to catch up on!

As I’m sure you gathered from the title of this post, the debate about alligators versus crocodiles still rages on within the family. Although Catherine declared it an alligator due to its shape, and teeth and jaw structure, most people still refer to the creature as a crocodile. And sometimes you’ve just gotta go with the flow. So, apparently, it is now a crocodile.

It’s not often that I find myself incapable of finding the right words to paint the perfect, descriptive picture of something. This is one of those times. The creation of the crocodile has been nothing short of amazing. And words don’t do it justice. I only wish I could translate to words how much heart, soul, talent, frustration (and more than a few swear words…), perfectionism, and hours Catherine has put into the production of her most amazing, life-like creation yet. Where I fail with words, I hope to make up with these fantastic “in-progress” shots Catherine gave me.

Picking up from where I left off in my last post….. Catherine used a table saw to cut out this perfectly sized body, head, and feet:

Next came the chicken wire and padding to give it shape:

In between shaping the body and adding the toes, Catherine painstakingly hand molded each and every tooth:

By far the most frustrating step was getting the “skin” on and secured, and still make the thing look real. She didn’t like it the first time she put it on, so she took it apart completely and started over. And then did that one more time until it was just right:

She had to put in all those teeth, then paint each one by hand to give them the realistic I’m about to eat you for lunch look. My father, the dentist, would be proud: 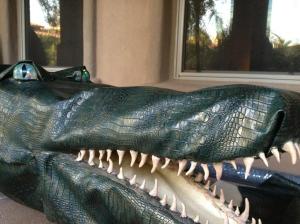 And when the whole thing was put together, everyone could tell there was something missing. Except no one could tell what it was. No one, except Catherine, that is…. after evaluating it head to toe, and back again for a couple of days, she figured it out. The croc looked dead. She knew exactly how to fix it. He needed pupils (really?? who knew?):

There you have it….. 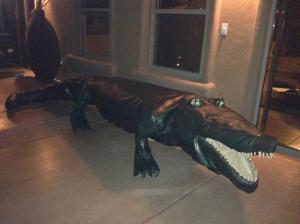 This creature will be lurking somewhere near the swampy, foggy grotto, just waiting for an unsuspecting victim to walk by. The head is hinged, so the jaw can swing back and forth. The feet are on casters so he can be lurched toward, creating fear in even the bravest passerby.

This project is the perfect example of what sets Catherine apart from every one else. Even though it took four times longer than she ever anticipated, and it set her back several weeks, and it was far more difficult than she predicted, she never gave up. That’s what makes Catherine, Catherine. And that’s what makes The Macabre Inn the must-see event of 2013!

How Halloween Unites a Family

My very conservative Catholic father might take exception to my assertion that Halloween unites a family (well… unless I tie it in to All Saints Day, which I’m not doing). But perhaps after reading this blog post, he may change his mind.

Let’s take a look at the typical modern American family. Since I’m fairly certain that our family is pretty typical, heck! let’s take a look at our family! (Yes, I’m well aware that there are those who would argue that ours isn’t exactly typical, but we’ll save that argument for another day. For now, I’m talking about the big, broad, brushstrokes of a typical American family).

You’ve got parents pulled in multiple directions, usually due to job necessities or other obligations. You’ve got college age kids who are more interested in the next frat party or drinking game than hanging out with family. There are the boys (young and old) who would far rather play video games than do just about anything else in the world. The teenage girls, of course, are significantly more interested in their social life than catching up with siblings and parents. Even the young ones would rather be riding bikes, playing instruments, or creating some new art project, than sitting around the table talking about the same subject as the others (not that I’m really complaining about that one…).

So where does Halloween fit into all of this? It’s come as a surprise…. even to the most optimistic of us adults. And it has trickled its way into our daily lives over the last few weeks. The parents are working together to solve problems like coming up with the perfect name, figuring out how to get the zombie people to stand up in the pool, or whether to build or buy the clown tent. The college age kids are suddenly talking about memories of Halloweens past, and that they can’t wait to bring their friends from school home to see this year’s spectacular. Grandparents are showing up with ideas about werewolf fur and oversized invaders scaling the walls.

The boys – yes the boys – are taking great pleasure in discovering what new Halloween object was created or purchased that day. (The other day, I came home and started cooking, only to notice there was a creepy skull placed on my cutting board. One of the boys could hardly wait to see my reaction to finding it where I normally prep all the food. He was honestly more interested in waiting for my reaction than he was in the game he was playing. He completely cracked up at my reaction. It was awesome to see!)

And even the teenage girls – perhaps the toughest nuts to crack – have joined in on the fun. They put down their Facebook, iPhones, and snapchat to find out how they can help create a piece of the Macabre Inn.

Everyone is engaged. And everyone is working together. That, my loyal readers, is how Halloween unites a family.

P.S Just in case any of you are worried about my conservative Catholic father being a buzz kill on the whole thing, you can lay those fears to rest. He is every bit as involved as the rest of the gang. He is all queued up to help Catherine build the vortex tunnel, the clown tent, and anything else that requires his assistance. So I’m pretty confident that in the end, he’ll have to agree with my premise. And he’ll do it with a smile on his face.